Originally hailing from Australia and now based between London and Berlin, Tim’s understanding and ability to capture cultures and sensibilities that are not his own have given his projects a unique and honest quality.

Most visible through his feature length documentary Brexitannia shot in 2017 around the time of the Brexit vote, capturing the mood of the UK at that divisive time. The film was critically acclaimed and has a prestigious festival run in over sixty international festivals, many of which giving the film ‘special mention’ status as well as broadcast television screenings.

Commercially, Tim has directed work for clients such as Nike, Adidas, H&M, The UK Labour Party and most recently Selfridges. Tim’s commercial style is recognised by their high energy fusing his skills as a fiction to gain impactful performances with honesty. He has crafted many projects around a myriad of youth culture scenes, capturing the impact on the wider collective consciousness.

When COMPULSORY were approached by the Labour party in 2019 to make a final campaign film, their first thought was to bring in Tim to direct and have been collaborating with him ever since. Tim’s ability to bridge feature length documentary format and commercial projects gives him an edge in this exciting area of filmmaking.

EP Kadri Mahmoud said about Tim joining the roster at COMPULSORY “Tim and I have developed an amazing friendship through the projects we’ve worked on together and welcoming him officially into the family only feels natural. This is a true filmmaker with a distinct voice and approach to story-telling, something I want to catalyse and see in mad, unexpected environments. The documentarian in Tim is something that particularly excites me as COMPULSORY is continuing to push the format in both its commercial and film departments. Tim will no doubt shatter our expectations, and likely our schedules too.”

Tim Kelly said about the signing “Since the first time we worked together on the I’m Voting Labour film in 2019, being on the COMPULSORY roster was one of the things I wanted the most in the world. So, I am absolutely chuffed to be signed. All organisations are made of the people inside of them and there is so much care, laughter and friendship that comes out of my experience with this crew. It’s a space where I can honestly be myself as a person and a director. I look forward to testing our relationship in the future as I pitch increasingly absurd feature length ideas and demand they get a better couch for napping on.”

Alongside his commercial projects, Tim is currently making a short film about the firework phenomenon in Berlin on New Years, and a feature about hypnotism. 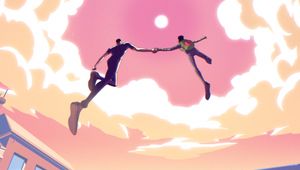